Budgeting and planning at any age 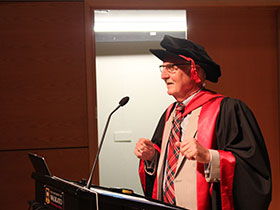 Financial literacy : Professor Stuart Locke at his inaugural professorial lecture given at the University of Waikato.

Read the small print, do your homework and think about the true cost before taking out pay-day loans, funeral insurance or filing for bankruptcy. That was advice from Professor Stuart Locke at his inaugural professorial lecture given at the University of Waikato last night.

Professor Locke said just like get-rich-quick schemes, people should be wary of taking pay-day loans with exorbitant interest rates, they should know that different investment schemes are suitable for different age groups and that bereavement insurance might only be a good idea if you plan on dying early – otherwise you may be better to self-insure.

Professor Locke has had a long career in finance, as an academic and practitioner, and he said it surprised him that many people at management level had no interest in finance. “Yet you cannot be involved in important decision making if you don’t understand finance,” he said.

He was also critical of small businesses that failed to have proper business plans and fail to budget, and said it should be the same for students – they needed to know how to live within their means once they move out of home. “Budget and plans are not dirty words; they really do contribute to success.”

Financial literacy should be taught in schools as a way to break the cycle of poor financial management, he said, and that had become his mission.

In addition, Professor Locke said people should be much more familiar with their consumer rights so they know where to go when they are in strife of feel they have been treated unfairly.

In wrapping up the lecture, Deputy Vice-Chancellor Professor Alister Jones said Professor Locke’s message was on the money. Professor Jones co-chairs APEC’S science and maths education working group and at a recent meeting in China representatives from all 21 countries agreed financial literacy should be a top priority in education.

Budgeting and planning at any age is licensed under a Creative Commons Attribution 4.0 International License.