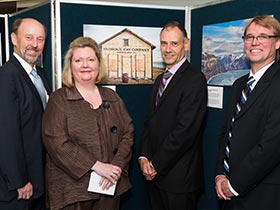 The University of Waikato is hosting a bi-lingual exhibition of photographs and covers from Canadian Geographic magazine depicting scenes from the Canadian Arctic.

He thanked Her Excellency Madame Chrétien for her many years of support of the University and the CNZSU, for her role as patron of CNZSU and for her help toward financial assistance for hosting such events as lectures and the photo exhibition. In addition to this she helped secure $6000 worth of books for the University library.

Canadian leadership on international Arctic issues has come to the forefront with the country’s 2013-2015 chairmanship of the Arctic Council. To meet the challenges and opportunities of a changing North, Canada is taking concrete action in exercising Arctic sovereignty, protecting environmental heritage, promoting social and economic development and improving and devolving Northern governance.

In partnership with the Royal Canadian Geographical Society, the exhibition provides a glimpse into the lives of Northerners, and offers perspective on the environment and activities that help shape and influence this region.

The exhibition runs until 1 May on the 4th floor of the Student Centre.