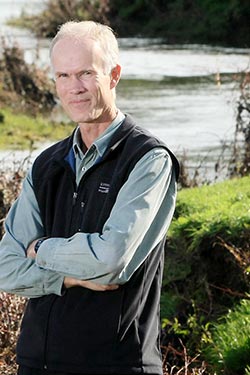 An economic perspective: Dr Dan Marsh says in theory, cap and trade schemes could be a good cost option for farmers.

Waikato University economists are working with DairyNZ to assess whether cap and trade schemes could be used to improve water quality.

While different local authorities are coming up with different ways to manage water quality, Dr Dan Marsh does the number crunching and uses models to track what it costs farmers to achieve a given goal or target.

“Some regional councils have set across-the-board limits for allowable nitrate leaching. I’ve found that if farmers were allowed to trade allowances, then in theory, leaching reductions could be achieved at a lower cost,” says Dr Marsh.

“One way of bringing this sort of flexibility into the system is by introducing a cap and trade system for nitrate leaching,” Dr Marsh says.

“Farmers are well known for their skill as traders of livestock, crops and land, we aim to find out whether these skills can be used to achieve better water quality at an affordable cost.”

At the Waikato Experimental Economics Laboratory, Dr Marsh has started running tests with students to test his theory and see how adept they are at trading.

Experimental economics enables economists to understand the extent to which an individual’s behaviour is affected by various testable factors in a controlled, specifically designed environment.

The experiments use rewards to mimic real-world incentives. And in the lab, set up a bit like a call centre, the economists try to remove the complexities of the world so that respondents focus only on the factors that directly affect the decision processes.

The next step for Dr Marsh is to gradually introduce more complexity into these experiments to gain a better understanding of how farmers might respond to a real cap and trade system.