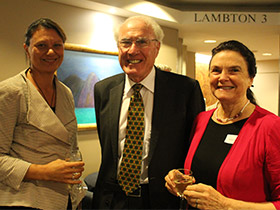 A unique initiative to take a range of leading researchers to Wellington to discuss new ideas around fresh water proved a popular move with stakeholders and policymakers.

Each researcher gave a 15 minute presentation before a lively open discussion.

Bryce Johnson, the Wellington-based chief executive of Fish & Game NZ, congratulated the University for its initiative and hoped similar events could become a regular occurrence.

“It‘s great to see a university actually come to Wellington with fresh ideas about an issue critical to New Zealand. More power to them, there should be more of it,” he says.

Professor Jones says the forum was successful in highlighting the University of Waikato’s unique fresh water expertise and knowledge.

“This was an opportunity to showcase the interdisciplinary approach the University of Waikato takes to regional, national and global issues and we made a number of new connections with people and organisations who weren’t previously aware of our strengths in this area,” he says.

It is likely more forums will be held in the future, both in Wellington and at other locations.