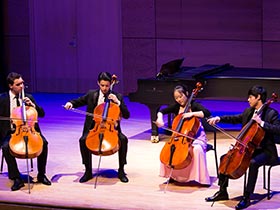 Music performance students from the University of Waikato competed in the annual chamber music competition finals last week with the cello quartet ‘Quatro’ securing the top prize of $1,500.

The winning group Quatro is made up of cellists Catherine Kwak, Sam Lucas, Jacky Siu and Alexander Swale and they performed works by Mozart, Wagner and Piazzolla.

Senior lecturer and cello tutor James Tennant says that this event honours the best five groups of the programme, who are then examined and selected from the total of 12 groups enrolled, and has them compete in a public concert format.

“Last night, with an audience of over 100 people enthusiastically supporting their favourites, the concert was full of passionate enthralling music making,” says James.

For the past two years this competition has been sponsored by the Hamilton Chamber Music Society, who also has donated a $2000 cash prize to be divided by the winning groups.

These two groups will also be nominated to represent the University of Waikato later in the year in the Royal Overseas League Chamber Music Competition which is contested between five of the main tertiary music departments in New Zealand.