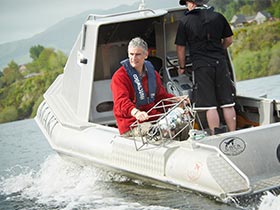 Better water data: Waikato University Professor David Hamilton is investigating how the country's largest 4000 lakes could be monitored by a collaboration of technology.

New Zealand scientists could monitor the water quality of the country’s largest 4000 lakes if they made better use of technology and collaborated with experts from other disciplines.

Waikato University Professor David Hamilton, who is the Bay of Plenty Regional Council Chair in Lake Restoration and leads the Water Quality Group for LERNZ (Lake Ecosystem Restoration New Zealand), says the information potentially available by such a move “is quite remarkable”.

Remote sensing technology has been around for more than 20 years and has been used by LERNZ for several projects, including monitoring of a diversion wall in Lake Rotoiti. The wall diverts water from the Ohau Channel - which links Rotoiti to Lake Rotorua - into the Kaituna River, rather than allowing it to flow into Rotoiti.

“We had a major decision-making process to be able to try to understand what might occur (when the wall was built). We had to be fairly confident that if you built this $10 million wall it was going to work,” he says.

“We took the information contained in a remote sensing spectral image and could see where the water from Lake Rotorua was going – through the Ohau Channel and down into the Kaituna, effectively bypassing Lake Rotoiti once the wall was installed.”

Professor Hamilton says similar technology could now be combined with lake monitoring buoys to validate information from satellites passing overhead to monitor the 4000 New Zealand lakes larger than one hectare. Lake monitoring buoys, which have been pioneered in New Zealand by Professor Hamilton’s University of Waikato colleague Chris McBride, currently take water quality readings in 12 North Island lakes every 15 minutes. They could be deployed more widely around the country to potentially connect with a satellite every time it passed overhead, providing valuable real-time data.

“At the moment we’re monitoring roughly 100 lakes throughout New Zealand. So what would be done would be to suddenly open up an archive from 100 to 4000 lakes by using this type of technology,” says Professor Hamilton.

He says NASA has recently released an archive of remote sensing images collected over the last 30 years “but at the moment we don’t have the people or collaborations developed to be properly utilising this information”.

“We’re able to connect many of these different types of technologies but we have disciplinary boundaries. The real challenge is connecting these disciplines to optimize the quality of the information.

“It involves more than just the people who can take the remote sensing images. It involves connecting with the IT people, who can process the enormous volumes of data, with people on the ground who are actually doing the measurements and with remote sensing technologists.”

Professor Hamilton says many of New Zealand’s freshwater scientists recently got together and developed three major themes - legacies, resilience and rehabilitation - which they considered to be “critical” to the management of fresh water in New Zealand. They would need collaboration to address these themes and improve the status of freshwater in New Zealand.

“In order to be able to address some of those issues, we need to have best practice science and environmental modelling, stakeholder and societal participation, and capability training to develop the next generation of scientists who can work across the disciplines.”