Completing the nitrogen cycle, improving the carbon content of soils 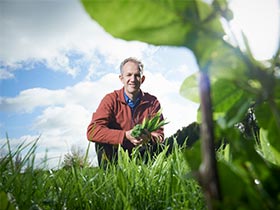 Completing the nitrogen cycle: Professor Louis Schipper is investigating ways of increasing the carbon content of soils on dairy farms.

Human acceleration of the nitrogen cycle has increased food production for billions of people.

We’ve converted atmospheric nitrogen gas into biologically-available forms that have increased plant and animal growth substantially. However, excess nitrogen moving through the landscape leads to unwanted environmental effects, such as degradation of surface waters

Completing the cycle to return nitrogen to the atmosphere requires us to learn how to work with soil microorganisms.

Professor Louis Schipper and his colleagues have worked out that in many places the natural filtering system of riparian wetlands - which encourage this process - have become dysfunctional, particularly when organic material have been lost from the soil.

Microorganisms use this organic material to convert dissolved nitrate to nitrogen gases, a natural component of the atmosphere.

By returning organic material to the soil, these nitrate removal functions can be restored.

Professor Schipper has devised ‘denitrification walls’ that remove virtually all of the nitrogen from water before it reaches our waterways.

Essentially these are large ditches filled with things such as sawdust, woodchips or other organic materials.

Professor Schipper says the research is now at a stage where it can go out “into the real world with confidence”.

Gaining traction in the US

The denitrification beds are gaining traction in the US, where they are being considered for use in nitrogen-impacted waterways such as in the Mississippi Basin and Chesapeake Bay.

Professor Schipper is also investigating ways of increasing the carbon content of soils on dairy farms through the use of more diverse pasture swards, while maintaining or increasing grass growth or farm production.

Plants such as chicory or plantain have deeper and more diverse root systems than the traditional ryegrass clover mix. Along with potentially retaining more carbon in the soil, they may also improve sward resilience, particularly in times of water shortages.

This research – which is still in the early stages - is being funded by the New Zealand Agricultural Greenhouse Gas Research Centre.

Completing the nitrogen cycle, improving the carbon content of soils is licensed under a Creative Commons Attribution 4.0 International License.