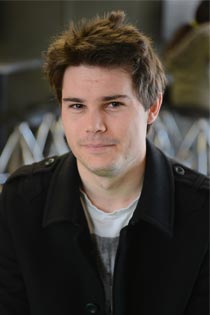 Former Hamilton Boys’ High School student Gage Hall is in the final year of a Bachelor of Computer Graphic Design at the University of Waikato.

Before choosing his degree, Gage says he’d spoken to another student who had taken the course and highly recommended it because of its web design element.

“I love the freedom of being able to create something, especially motion graphics and film. This is what I’ve enjoyed most about the course. Also the lecturers are really interesting and you can talk to them pretty much anytime. They’re really helpful.”

Gage is a Sir Edmund Hillary Scholar for graphic design and says being awarded the scholarship was a large part of what helped him decide to study at Waikato.

Sir Edmund Hillary Scholarships are the University’s most prestigious scholarships and are awarded to high academic achievers who are also achieving in the arts or sport. Scholars have their course fees covered, receive specialist coaching and mentoring and take part in personal development and leadership programmes.

Gage says he’s enjoying his study and also the social side of uni life, having joined an indoor netball competition at the University Recreation Centre.

Once he’s finished his study, Gage hopes to get into feature film making, having already made a couple of short films as part of his degree.

Student Recruitment Advisers from the University of Waikato will be at the Hamilton Careers Expo at the Claudelands Event Centre on Sunday 8 June from 10am-4pm and Monday 9 June from 9am-3pm.