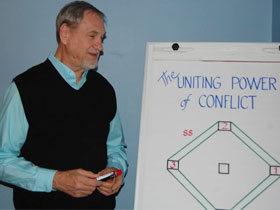 The Uniting Power of Conflict: Dr John Hoover will talk about his conflict research model and its relevance for corporate training at the Waikato Management School.

Conflict is a form of communication that crops up in our personal and working lives. Some people seem to follow it around, others try to avoid it.

Dr John Hoover, US psychologist, educator and author says there are ways to resolve conflict that can have a unifying effect. He’ll be talking about his research model and its relevance for corporate training at Waikato University Management School on 19 March.

The Uniting Power of Conflict

He’s got a new book out called The Uniting Power of Conflict and his presentation will give an overview of how people with divergent viewpoints can avoid the usual pitfalls of conflict.

Dr Rosalind McClean, an honorary lecturer at the University of Waikato says she has used Dr Hoover’s techniques to good effect.

“John’s model derives from the human psychology of basic needs,” she says. “You create a situation where participants, irrespective of their stance, feel validated. Even if the only thing you have in common is that you agree to disagree, that is a starting point for creative negotiation. Once those basic needs are met through effective communication, possibilities then open for finding solutions hitherto unanticipated by either party.”

Dr McClean says the techniques can work at a domestic level, in the workplace, or in international peace negotiations. She says there’s an EC representative trained in Dr Hoover’s techniques going to Lebanon next month to work with leaders from divergent community groups, who, after more than 30 years of debate, have been unable to resolve an environmental issue affecting the wider region. The key mediator will be using Dr Hoover’s methods to open a fresh dialogue with the groups involved.