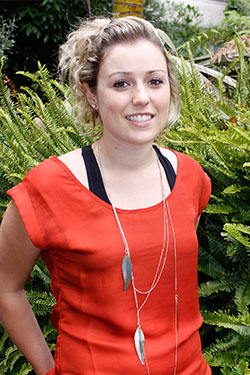 The $1500 scholarship was established to commemorate the spirited life and achievements of Tess Embling, who, after establishing a successful career in IT, made a brave move to pursue her love of nature through a science degree at the University of Waikato. She lost a battle with cancer in 2010.

“I applied for the scholarship because I had Tess as a lab demonstrator during some of my undergraduate papers and I admired her hard working personality. I could also relate to Tess's life and her decision to change from a career in IT to study science, which was similar to my recent decision to come back to study to complete an honours year,” says Bridgette.

Bridgette’s honours research project will focus on two unrelated aspects of conservation biology; kiwi breeding and deterring pests. She says that the research could potentially be beneficial for endangered species recovery programmes and aid in management of predator proof sanctuaries.

“For me, being able to support native wildlife in a practical way is a really important part of the overall goal of my studies, so to have an impact on conservation management, would be a great end result.”

Bridgette has not taken the typical pathway into study. Between high school at Sacred Heart Girls’ College in Hamilton and starting a Bachelor of Science (BSc), she received a scholarship from the Department of Conservation. She worked with the organisation in the Central Plateau region, where she was involved with everything from searching for carnivorous land snails to tracking fantails through the bush to their nests.

She says this introduction to working with wildlife was what prompted her to enrol at Waikato University to study zoology, and while at university, opportunities to work further with wildlife and flora popped up everywhere.

“During the BSc I photographed the very rare Archey's frogs, landed in a helicopter on the side of a mountain to count plants in experimental plots, took part in a surveying programme on a remote island in Australia, waded through water to save a Dotterel nest and measured growth of trees in a newly developed native reserve.”

After graduating with a BSc in 2010, Bridgette worked in a microbiology research laboratory, before travelling abroad for six months, working with horses.

“While I enjoyed the practical side of working with animals and undertaking general laboratory duties, I missed the challenge of the academic nature of university and the mental success of being able to work through a problem. When I finished a diploma in German at the University of Vienna, I discovered that I thoroughly enjoyed being back in a learning environment. It was then that I chose to return to Waikato for graduate study.”