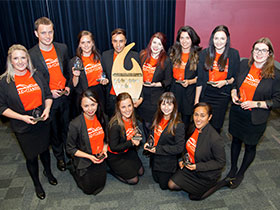 Putting confrontational political messages in front of students and asking them to respond turned out to be a winning idea for a group of Waikato Management School Public Relations students.

They were taking part in the annual Chesterman Group PR Campaigns competition, where teams have to develop a multi-faceted PR strategy for a particular organisation. This year’s client was the Electoral Commission, and the Loud & Counted group’s campaign used social media platforms and face-to-face communication to encourage young people to get out and vote.

“Our research showed that young people don’t think politics is relevant, so we decided to show them it was,” says Loud and Counted Team member Kate Lunn.

“We created a big orange wall and put messages on it that we knew would get a response; addressing issues about money in general the cost of living, student loans, internet privacy and the environment, and then we took the wall to Wintec’s two campuses and around the university. The idea was to change the perception of what it means to vote and why young people should engage in the democratic process.”

Getting people to vote

Kate says they asked the potential voters to sign a pledge to vote. “More than 220 young people pledged to vote either online and at our orange “Loud” wall. When we followed up, respondents said our campaign had a moderate-to-high effect on people’s decision to vote.”

The judges were Chris Williams from King St advertising, PR practitioner Heather Claycomb, Gordon Chesterman and alumnus Brad Pogson from Vodafone. They said all four campaigns were of a very high standard, the best they have seen over the years that the competition has been running.