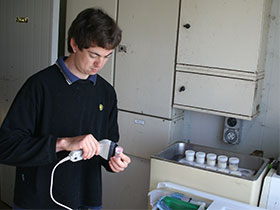 Electronic engineering: Waikato engineering graduate Andrew Russell scans milk samples which will later be analysed, during a visit to a Waikato milking shed as part of his role at Lely Sensortec Ltd.

Andrew works for Lely Sensortec Ltd, a company which designs animal management products. His role within the company is to complete research and development into new and innovative ways to electronically sense cattle herd health. In the past a significant project for the company has been creating a milk quality monitor for use on dairy farms.

“On a typical day I may be working on data analysis, or designing and assembling new prototypes. Testing these prototypes is a highlight, during which we visit farms, talk to farmers and recreate real life situations,” says Andrew.

He says the main experience that stood out in his undergraduate degree was the opportunity to complete work placements as part of his study.

“Work placements are an opportunity to get a foot in the door and get some real life experience. During my second work placement I worked here at Lely Sensortec. I studied the effect of temperature on sensors and learnt how to calibrate against temperature effects.”

Following undergraduate study, Andrew received a masters scholarship from the Ministry of Science and Innovation, which allowed him to build further on his relationship with Lely Sensortec, completing research into milk spectroscopy in collaboration with the company.

Dairy farming made smarter is licensed under a Creative Commons Attribution 4.0 International License.