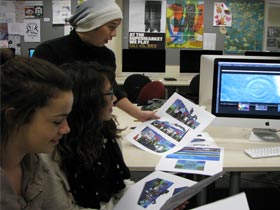 Fieldays stand designer:  Keith Soo working with his students.
In a white beanie and black top, with an impish smile and a friendly word for everyone, it would be easy to mistake Keith Soo for a student.

You imagine he’d be the sort of bloke you’d run into out on the town, rather than in a lecture theatre.

But Keith is no stranger to lecture theatres in his role at the University of Waikato as a senior lecturer in computer graphic design and while he’s been on staff for nearly ten years, it’s likely he’s more well-known overseas, where he’s a highly regarded, award winning interactive graphic designer.

In 2009 he won the annual Shanghai Science and Art competition, beating designers from a dozen other countries with his 3D colour, sound and movement installation.

That led to him taking 18 months off from the University to be involved in several projects for the mammoth Shanghai World Expo in 2010, where he designed a wide range of work for the Brazil, Monaco and Liverpool pavilions.

Keith returned to the University in 2011 and in 2012 won a Faculty Teaching Excellence Award.

Last year he took part in the Institute of Electrical and Electronic Engineers (IEEE) Visual Arts Programme Art + Experiment with his work VICISS, an interactive mirror than turns a user’s image and movements into melodic patterns.

This year he’s working a little closer to home, helping with the design of the University’s stand at Fieldays.

Keith and his students have spent several weeks designing aspects of the stand, which has a water based theme.

He says his work is designed to get people engaged with the stand.

“It shows how different stages of water affect our lives. The audience can reflect on that. If they are familiar with the environment, if they can identify themselves in that, then they will keep looking for new things,” he says.

Keith is originally from Singapore and studied at the Nanyang Academy of Fine Arts – the oldest such institution in South East Asia – before heading to the Whanganui School of Design, where he completed a Bachelor of Computer Graphic Design, specialising in interactive design.

He later completed his Honours at the same institute before completing his masters in a conjoint programme between Whanganui School of Design and the University of Waikato.

He always wanted to be an artist, initially a sculptor, and he enjoys both his work at the University and the international assignments he is involved with.

“The more people you work with internationally is good and being exposed to their work is amazing.”

Designer shows his stuff is licensed under a Creative Commons Attribution 4.0 International License.