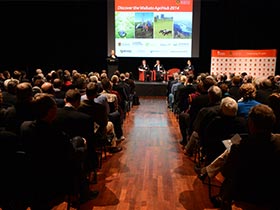 More than 200 business leaders and scientists turned up to a public launch of the Waikato AgriHub at the University of Waikato on 10 June 2014.

Opened by the Mayor of Hamilton Julie Hardaker and University Vice-Chancellor Professor Roy Crawford, the launch has followed nine months of discussion between nine organisations, including Crown Research Institutes, universities and agricultural sector organisations that are forming the kernel of the hub.

A panel of speakers including AgResearch CEO Dr Tom Richardson, DairyNZ CEO Dr Tim Mackle and Waikato University Professor of Agribusiness Dr Jacqueline Rowarth answered questions on the reasons for establishing the Waikato AgriHub and how it would help deliver on the Government’s goal of doubling the value of New Zealand’s exports by 2025.

Growth of Agribusiness in the Waikato

Dr Richardson said the Waikato “stood out” as a growth region for the Agribusiness sector in which a well-coordinated approach to research could make a difference for regional and national outcomes over the next few years.

Addressing the challenge to double export earnings while maintaining the environment, Dr Mackle said, “Economic and environmental benefits are not mutually exclusive. Responsible dairying will make us more competitive. It’s not all about volume, it’s also about value.”

The decision to form a Waikato AgriHub followed the announcement last year that AgResearch would be investing to form hubs focussed on different areas of agri-sector innovation through its campuses at Ruakura, Palmerston North, Lincoln and Invermay, near Dunedin.  The Ruakura campus would focus on farm systems, environmental science and dairying.

Waikato University Deputy Vice-Chancellor Professor Alister Jones says with other organisations already expressing interest in becoming part of the Waikato AgriHub, it would form a platform for attracting investment to the region and delivering innovation, productivity and sustainability across the agri-sector.

“In this mix the University of Waikato offers both educational and research resource in agribusiness, agri-technology and environmental sustainability Our focus is non-traditional and designed to offer the agribusiness sector the knowledge it needs to operate sustainable farm systems and complex value chains to compete in today’s global markets.”

The partners have agreed to pool resources to concentrate on four major workstreams:

To underline its resolve, the University last night announced planned investments over the next 12-18 months would include appointing a dedicated Agritech Innovation Manager to improve its connectedness with the sector, establishing a dedicated Agri-tech Seed Fund to assist with early-stage development of new initiatives, and launching an Agri-tech Entrepreneurial Fellowship to help build capability focussed on industry innovation.

Discover the Waikato AgriHub is licensed under a Creative Commons Attribution 4.0 International License.