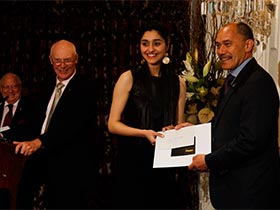 University of Waikato engineering student Shalini Guleria has been awarded second place in the 2014 Sir Paul Callaghan EUREKA! Awards for her idea to reduce side effects in the treatment of cancer.

Shalini presented her idea during a 12 minute presentation alongside 11 finalists from around New Zealand, including fellow Waikato University engineering student Rochelle Molina.

“My idea was to provide a better treatment for cancer which would have fewer side effects for the patients. This idea involved genetically engineering a non-pathogenic virus called reovirus with the genes of natural killer cells; which play an important role in our immune system. I proposed that this complex called Natural Killer virus could possibly be the cure for cancer,” says Shalini.

Shalini, a former Hamilton Girls’ High School student, received a highly commended award of $2500 and was ranked second place in the competition. She received her award at Government House in Wellington. “It was an honour to be presented my award by Lieutenant General The Right Honourable Sir Jerry Mateparae.”

The purpose of the awards is to identify and foster young leaders who will bring about the New Zealand forseen by the late Sir Paul Callaghan ‘the most beautiful, stimulating and exciting place in the world in which to live’.

“This competition gave me a chance to discuss my idea with some great minds and I was so privileged that my idea was encouraged by various scientists who attended the event. I would like to thank EUREKA! for giving me this wonderful opportunity and I would personally encourage all the young scientists out there to take part in this competition in the future.”

University of Waikato Faculty of Science & Engineering Acting Dean, Professor Janis Swan attended the presentations and awards ceremony. “Waikato University should be very proud of Shalini and Rochelle, and their selection as finalists. The presentation Shalini gave was of an extremely high calibre and I was very impressed by the insight she showed in her idea for a new approach to cancer treatment,” says Prof Swan.

The EURKEA! Programme is open to secondary school and tertiary level students with an interest in science, technology, engineering or mathematics. The programme began in May, with regional workshops held throughout the country, including a session at the University of Waikato, which gave the competitors an idea of the process and what was expected.

In July regional finals were held across New Zealand and twelve finalists were selected for the finals, which were held 10 October 2014 at Massey University’s Wellington campus.