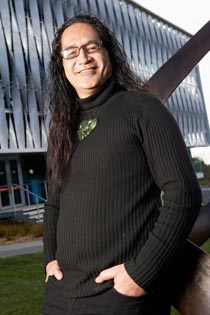 A Waikato University PhD student has just handed in his doctoral thesis and been awarded a Fulbright travel scholarship that will see him travelling to the US to present some of his research – inspired by a walk through his family graveyard or urupā.

Vincent Malcolm-Buchanan will use his Fulbright Ngā Pae o te Māramatanga Travel Award in Indigenous Development to lecture and present a paper at the Association of Social Anthropologists of Oceania (ASAO) conference in New Mexico. His paper is called The ‘Hilton Hotel Row’: NZ Māori and Urupā Memorialisation.

“The conference title is Changing burial practices in Pacific Island Societies, so my research is a perfect fit,” says Dr Malcolm-Buchanan.

“I was inspired to research the graveside topic after walking amongst the headstones at our private family urupā – where I was surprised at the elaborate and expensive headstones. My aunties called one strip, which includes the headstone of my mother, the ‘Hilton Hotel row’ which infers notions of extravagant wealth.”

Dr Malcolm-Buchanan says this embracing of extravagant aspects of traditional Western burials by modern Māori got him thinking about the changes in Māori memorial traditions and how they have variously changed through time.

“My research looks at when, how, and why, my people’s traditions of memorialisation transformed into such exemplars as the ‘Hilton Hotel’ row of memorial headstones.” It’s research he says was inspired by his University of Waikato mentors Professor Ngahuia Te Awekotuku, Dr Tom Ryan and Associate Professor Linda Nikora.

A latecomer to tertiary education, Dr Malcolm-Buchanan started university studying Commerce and Arts after being told he needed a degree to progress his career, but he soon realised there were other subjects that interested him more, and so he has remained at Waikato since 2004, first completing a BA, then a Bachelor of Social Science (Hons), a Master of Social Science (Hons) and now his PhD, which will be conferred in October this year. His PhD thesis is titled Cloaked in Life and Death: Tangi and Taonga in a Contemporary Māori Whānau.

Dr Malcolm-Buchanan encourages other Māori to consider studying at Waikato. He says that studying changes your life; the world opens up, and you’re exposed to facilities, resources and possibilities that you never knew existed.

He is a current member of the Association of Social Anthropologists of Aotearoa NZ (ASAANZ) and an associate researcher with the Anthropology Programme at Waikato University. He remains actively involved with numerous Te Arawa and Tuhoe projects.