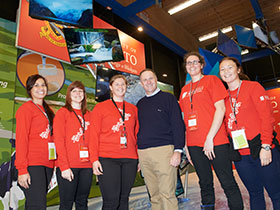 Going global: Prime Minister John Key on the university stand at Fieldays in June. The event’s international reputation is growing.

Making Fieldays the “agricultural equivalent of the Farnborough Air Show” should be a top government priority, a new report into its economic impact says.

Fieldays this year saw a massive surge in international exhibitors, prompting the report to suggest government sponsorship could be needed to sustain overseas interest.

The report says this growth “suggests the international importance of Fieldays is gaining significant momentum”.

“Government sponsorship with regard to overseas interest may be important in sustaining this increase in overseas involvement with Fieldays,” it says.

Aside from exhibitors, nearly 2400 international visitors were also recorded.

However, there is still some way to go before Fieldays matches Farnborough. The 2012 Farnborough air show attracted 109,000 trade visitors over the first five days, and 100,000 public visitors on the Saturday and Sunday. Orders and commitments for 758 aircraft were announced, worth US$72 billion.

The latest Fieldays economic impact report, by Dr Warren Hughes from the University of Waikato’s Institute of Business Research, shows while overall visitor numbers were down 4.2% on 2013, the agricultural showpiece still attracted 119,892 visitors over the four days.

The University of Waikato is a strategic partner of Fieldays.

Nearly half of all visitors were from the Waikato/Coromandel region, with the lower North Island, Bay of Plenty and Auckland the next biggest supplier of visitors.

Each paying visitor to Fieldays generated $3500 in sales revenue, including more than $500 in accommodation, entertainment and recreation in the region.

Visitors from outside the Waikato boosted the local economy by $34 m in areas such as accommodation, entertainment, transport and hospitality.

“It seems very clear that Fieldays has evolved into a major player in assuring New Zealand’s economic future. It is important for New Zealand to realise that the current Fieldays in Hamilton is New Zealand’s best shot at achieving and maintaining the world-class status of this event.”