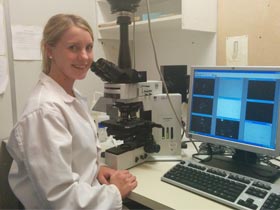 Brooke is studying for her Master of Science in biological science while working for AgResearch’s Stem Cell research team. The team is investigating the expression of genes throughout the early stages of embryonic development in cattle.

Embryonic stems cells (ESCs) are cells that are isolated from the early embryo that have the ability to self-renew indefinitely and turn into any cell type of that adult animal –a phenomenon known as pluripotency. Researchers have been able to derive ESCs in mice; however, attempts to replicate the process in other mammals have not yet been successful.

One gene that was found to be important for establishing pluripotency in mice is NANOG. NANOG encodes the transcription factor NANOG which regulates the expression of a variety of genes involved in self-renewal and plays a central role in the transcriptional network for pluripotency.

“Basically we want to know if NANOG also plays a significant role in establishing pluripotency in cows as it does in mice. We would also like to identify the various genes that NANOG influences.

“The results from this project will assist in improving our understanding of cattle reproduction and embryology, with the future goal of generating a truly embryonic stem cell line for livestock animals.”

Brooke says that ESC research will have a significant economic impact on the nation, due to its potential to improve animal productivity and ensure that desirable traits can be passed on to the next livestock generation with much more certainty and speed.

“New Zealand’s economy is largely reliant on the success of its livestock industry. The beef and dairy sectors alone generate over a third of the country’s export earnings. Improving animal productivity is an important priority for farmers and, by extension, the country as a whole.”

The New Zealand National Agricultural Fieldays Scholarships are awarded each year to graduate students undertaking research at the University of Waikato with a specific focus on the agricultural sector.

This year the scholarship was split between Brooke and management student, Thomas Macdonald. Thomas was awarded $17,000 to assist his study into the cost of environmental compliance in the dairy industry.

Waikato University has a long-standing association with Fieldays – the university’s founding Vice-Chancellor Sir Don Llewellyn helped establish the event in the 1960s - and as the key tertiary institution in the Waikato region, the university has been a Strategic Partner of the NZ National Agricultural Fieldays for the past eight years.

Mr Calder says the students’ work complements the 2014 Fieldays theme - Managing Resources for a Competitive Advantage. “Thomas’ research is addressing a current topical issue for our farmers while Brooke’s work will create new opportunity and possibilities for the future genetic lines of New Zealand’s cattle.”