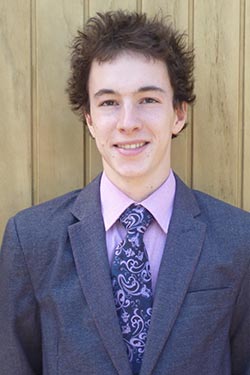 Paul Newton-Jackson, a first-year music student and Sir Edmund Hillary Scholar at the University of Waikato, is the fiftieth New Zealander to be awarded the Girdlers’ Scholarship to study at Cambridge University’s Corpus Christi College.

Paul says the opportunity to study Music Composition at Cambridge will be a “life changing experience” and he hopes the connections he makes at the university will enable him to bring the music of young New Zealand composers to international audiences.

A former pupil of St. Paul’s Collegiate School in Hamilton, Paul says that he aims to become heavily involved in the creation and promotion of music in New Zealand.
“My dream occupation would be to compose music professionally, while mentoring and supporting younger writers.”

The Girdlers’ Scholarship is valued at £25,000 per year and is funded by the Girdlers’ Company in the United Kingdom, a craftsman’s guild founded in medieval times. In 1952 the Company decided to grant an award to a young outstanding New Zealander every three years, with the award becoming an annual one since 1969.

“We had an excellent list of candidates to choose from and are thrilled with Paul’s very well-deserved selection,” says the Clerk of the Girdlers’ Company Brigadier Ian Rees, who is visiting New Zealand from the United Kingdom to commemorate the fifty-year milestone. “Paul has extraordinary academic ability and is a talented and creative musician who is humble about his achievements. He also has a strong work ethic and has been involved in a wide range of school and community activities demonstrating his excellent leadership skills.”

Paul says that the music course offered at Cambridge, which includes weekly composers’ workshops, will be intensive yet rewarding.

“Cambridge was the first university in the world to offer a dedicated music qualification, so it’s the ultimate university for an academic musician.”

Paul plays the piano, pipe organ, electric guitar, bass guitar and percussion. While he enjoys performing music his first love is composition – an interest which began when he attended a young musicians’ mentorship initiative at the University of Waikato.

In 2013 Paul received his school’s most prestigious prize, the Seaville trophy, for his extensive contribution to school activities. He was Deputy Head Boy, captained the table tennis team and was strongly involved in drama and music.

Paul will head to Cambridge in October where he will be ably supported by the Girdlers’ Company.

Brigadier Rees saysthat the Girdlers are proud to support the scholarship, which is symbolic of their long and close association with New Zealand. Since 1933 the Girdlers have hosted a reception for the New Zealand Society in London at their hall each Waitangi Day.

The scholarship is administered in New Zealand by Universities New Zealand – Te Pōkai Tara and will be formally awarded by Brigadier Rees at a function at the Wellington Club tomorrow evening, which will be hosted by Deputy Prime Minister Bill English.