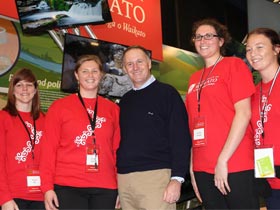 Prime Minister John Key was among a steady stream of visitors to the University of Waikato stand on the opening day of Fieldays on Wednesday.

Following the opening he was mobbed by the crowd before spending several hours touring the Fieldays site. He was greeted at the University stand by Head of CER David Craig, Professor Jacqueline Rowarth and several student ambassadors and recruitment advisors.

While the opening day was largely fine, Thursday was wetter and muddier, with gumboots essential for visitors. The University of Waikato is a strategic partner of Fieldays.

Fine opening for Fieldays is licensed under a Creative Commons Attribution 4.0 International License.