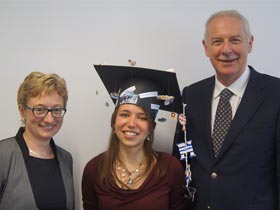 The first law and social science student to go through the INTERCOAST programme – a collaboration between the University of Waikato and Bremen University in Germany – has received her PhD.

Lisa Marquardt was awarded her PhD in April following her final verbal “Viva” examination. Her research looked at the way decisions are made about how we use our natural resources. The research involved a comparative analysis of environmental law across both countries. Ms Marquardt spent a year in New Zealand looking at the proposal to dredge Tauranga Harbour and the processes involved in making a decision.

She was part of a group of doctoral students on the INTERCOAST programme, a partnership between the two universities to study the marine systems of the Bay of Plenty and the North Sea in Germany to better understand the significant changes taking place in our coastal environments.

"INTERCOAST allowed me to study the application of law up close, for example through the attendance of Environment Court hearings in Tauranga, which helped me enormously to understand the functioning of legal systems,” Ms Marquardt says. “Also, the guidance from two supervisors from different cultural backgrounds helped me tackle the challenges of undertaking research at both ends of the world and comparing and combining the findings retrieved in two very different legal systems.”

“On a personal level, the exchange with locals and numerous fieldtrips across the country during my stay in New Zealand made me experience a glimpse of the magic connection that the New Zealand people maintain with their beautiful environment myself.”

Ms Marquardt’s New Zealand supervisor, Professor Barry Barton of the University of Waikato’s Faculty of Law, says the research adds to a body of literature that explains how environmental law works, especially the strengths and weaknesses of the Resource Management Act with regards to decision making.

“It is gratifying to see what can be done in a high level comparative analysis in the area of environmental laws,” says Professor Barton.

“In particular, it can be very fruitful to learn of how other countries are grappling with issues that are similar to ours. The INTERCOAST programme provides a framework that makes this kind of study possible.”

Ms Marquardt’s research compared the German and New Zealand processes, looking in particular at the criteria upon which decisions are made and the duty of decision makers, such as the Environment Court, to consider alternatives to the proposal put forward by an applicant.

INTERCOAST is a multidisciplinary programme including natural science, social science and law students across the two universities. Projects include looking at the impacts of harbour development on ecosystems, protection and utilisation of the harbour and coastline, sediment studies as well as the legal issues surrounding coastal and marine resources, and the social changes taking place in coastal communities.