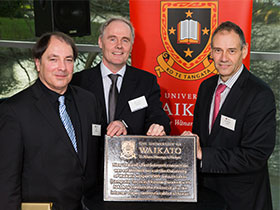 A plaque marking New Zealand’s first connection to the internet was unveiled in Hamilton on Wednesday and, unlike that first connection, the ceremony went without a hitch.

The man who made that initial connection in April 1989, John Houlker, was among the guests at the unveiling and says the University of Waikato’s innovative outlook had given him the confidence to press ahead with the ambitious plan.

“I remember things that went wrong but I was very appreciative of the support I got from the University. It was not without risk and the risk was substantial.”

He spent a Sunday on the phone to Hawaii trying to establish the link but had to dismantle and reconfigure the modem being used to get it to work.

Mr Houlker says the initial connection ran at 9.6kb per second, with this upgraded to a 14.4kb version soon after.

The current link operates at 40Gb per second.

He says they always felt the system, which was initially intended for education and research, would be successful.

“The guess we made that this would be the pre-eminent research vehicle was proved right,” he says.

“But it has developed way beyond research and education.”

Faculty of Computing and Mathematical Sciences Dean, Professor Geoff Holmes, hoped the historic plaque would be the first of many installed on campus and while he had embraced the benefits of the internet, it still had some way to go to completely satisfy him.