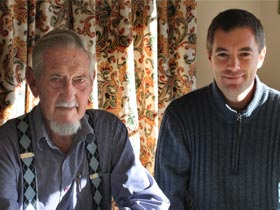 Research: Bill Flower with Jack Pronger, the most recent recipient of the Flower Fellowship.

As the recipient of the Flower Doctoral Fellowship in Agribusiness, a scholarship worth $30,000 a year for three years, Jack will look to address the ongoing impacts of drought on dry land farming, or farms that aren't irrigated.

The Flower Fellowship is awarded to a student whose research has relevance in the agribusiness sector, focusing particularly on issues of food production, farmer ownership and labour issues, New Zealand's role in global agriculture and the preservation of fertile soils. The University of Waikato has a comprehensive agribusiness programme, headed by leading agriculture commentator Professor Jacqueline Rowarth.

Jack's research will focus on identifying approaches to increase drought resilience by using more diverse mixes of pasture species - research that could have a significant impact on farm production. The research is being supervised by Professor Louis Schipper and Dr Dave Campbell from the School of Science.

His PhD will look at differences in seasonal water use between mixed sward pasture systems (a combination of different grass, legume and herb species) and ryegrass/clover pasture systems under dairy grazing.

He says there's been little research into paddock-scale water uptake of managed pasture systems in New Zealand, a gap he feels is worth addressing. With the economics of farming practices changing and the ongoing issue of climate change, identifying ways to combat the effects of drought is more important than ever.

"The knowledge gained through my research will hopefully contribute to more efficient water usage of pastoral systems, and increased pastoral production that will likely benefit the economy down the track."

Jack couldn't be more grateful for the Flower Fellowship. "It is a very generous scholarship and also well thought out in that you are encouraged to get your research out into the community."

Hamilton couple Bill Flower and his late wife Joan established the Flower Fellowship for the simple reason that they, as Mr Flower says, "wanted to do something good".

The Flowers have made a habit of giving back. In addition to the Flower Fellowship they have previously made available undergraduate prizes in global and environmental economics, and they often used to take in less fortunate young people onto their farm to work and live.

Mr Flower says that success comes down to having an inquiring mind and the willingness to work hard. "You only get out of this world what you put in," he says.