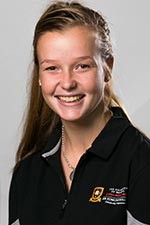 Waikato scholar: Megan Hull has received a Sir Edmund Hillary Scholarship from the University of Waikato.

Former Wairarapa College student Megan Hull from Pongaroa is one of the University of Waikato’s Sir Edmund Hillary Scholars this year.

Megan, who is studying for a Bachelor of Communication Studies majoring in Public Relations, hopes to use the opportunity to further her love of hockey which she has been playing since she was four years old.

“My older sister played hockey and I wanted to be just like her, so when I was four I picked up one of her sticks and thought it looked like a pretty fascinating sport.”

Megan’s dream has always been to compete at the Olympics, and one day hopes to make that dream come true. But for now she just wants to get on with her studies, play some quality hockey and hopefully be selected in the Junior Black Sticks and U18 National side.

“The Hillary scholarship means so much to me and will make a hugely positive difference in my pursuit of a communications degree,” she says.

“It takes a lot of pressure off my own bank account and means I won’t have to find part time work, resulting in more time to train. I feel so honored to be a part of such a high profile programme and cannot wait to see what it entails.”

The Sir Edmund Hillary Scholarship Programme, offered since 2005, awards scholarships to academic high achievers who show significant leadership qualities and also excel in sport or in the creative and performing arts. The scholarships provide full university course fees while studying at Waikato, comprehensive support for the recipients’ academic, sporting and/or arts activities, and additional support in leadership and personal development.