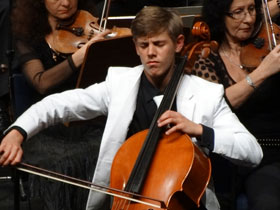 Students from the University of Waikato music programme are on a roll with young cellist Matthias Balzat taking a shared first prize at the 47th annual National Concerto finals at the weekend.

The talented fourteen-year-old and Hillary Scholar continues Waikato University’s successful tradition at this prestigious competition as the fourth consecutive music student to win the top prize and the People’s Prize (audience vote) at this annual competition.

Won over the judges

Matthias, or ‘Matti’, played his William Walton Cello Concerto last night and “left it all on the stage in his performance that won over the judges, at least to a point they could not separate him from the shared prize violinist, who was eight years his senior,” says Senior Lecturer in cello, James Tennant.

“What can I say about this brilliant fourteen-year-old cellist playing with orchestra for the first time, and a concerto that was by far the most difficult of the evening?!”

“The young know no fear, and even though he was getting a little tired by the end, the judges appreciated the total commitment, expression and projection of Walton's music.”

First time playing with an orchestra

Being his first time playing with an orchestra, Matti was a little concerned about his projection. “My first rehearsal was a bit messy, so I was a bit worried, but the dress rehearsal was much better so that helped to calm my nerves.”

“I was pleased that the judges were sitting only three or four rows back from the front as usually they would be right in the back row, so in terms of projection, this really helped.”

Clarinettist and Hillary scholar Nathaniel Smorti was also competing in the final and started the evening with a wonderful performance of his Weber, and won third prize overall as well as the Junior Jurors prize.

The prestigious competition is open to musicians aged 25 and under, and alternates between being open to pianists one year and all other instrumentalists the next.

Pianist Andrew Leathwick was the third Waikato music student to win the National Concerto Competition in the last four years, with two cellists taking top prizes in previous years; Edward King in 2010, and Santiago Cañón Valencia in 2012, (the 2011 final was unable to take place).

“Having Waikato students winning the last three contested finals demonstrates that the students we are producing are among the very top students in the country,” says Tennant.