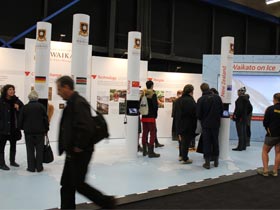 Waikato on ice: The University of Waikato’s stand last year featured research from all around the globe including Kenya, China and Mongolia, the USA and Pacific Islands, and research being done by Waikato scientists in Antarctica.

A mutual interest in contributing to – and growing – New Zealand’s agricultural sector is behind an enduring strategic partnership between two iconic regional organisations.

The University of Waikato is into its eighth year as a strategic partner of the National Agricultural Fieldays at Mystery Creek and Vice-Chancellor Professor Roy Crawford says it is an important partnership for both organisations.

The University and the New Zealand National Fieldays Society signed their latest strategic partnership in March and Fieldays Chief Executive Jon Calder says the relationship has developed well over the years “to the point where we now have a true partnership”.

The University of Waikato has embraced the theme of this year’s Fieldays - ‘Managing Resources for a Competitive Advantage’ – by focussing on one of the key resources in need of careful management, fresh water.

“The University of Waikato has a deliberate focus on fresh water this year and I would encourage Fieldays visitors to visit our stand to see the latest work being carried out by our world leading researchers,” Professor Crawford says.

“You will see examples of how our research and ongoing collaboration with other organisations is improving the lives of farmers and others involved in land-based industries.”

“Fresh water is one of our most precious resources and University of Waikato researchers have been working in a diverse range of areas to protect, preserve and improve not only the quantity of fresh water available but the quality of that water too."

The University’s innovative approach to fresh water research was highlighted in March when five top academics took their work to Wellington for the inaugural ‘Fresh Water - Fresh Thinking’ Forum, which was attended by a range of individuals and groups, including Fish and Game New Zealand, GrowRotorua, Livestock Improvement Corporation, Waikato-Tainui College for Research and Development, the Royal Forest and Bird Protection Society and a number of government departments.

Much of that research will be on show at our stand during Fieldays.

While the ‘Fresh Water - Fresh Thinking’ Forum had a national focus, the University of Waikato continues to play a key role in the region.

Last year it contributed $938 million to the national economy, with nearly $800 million of that going to the combined Waipa, Waikato and Hamilton City Council areas.

That total is projected to hit $1 billion in the next two years.