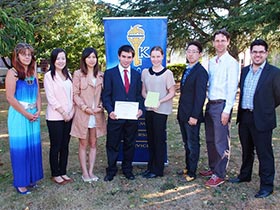 Top students: The University of Waikato chapter of Golden Key has achieved Gold Standing in the latest round of awards from Golden Key Asia-Pacific.

The University of Waikato chapter of the Golden Key International Honours Society has received a Gold Standing rating in the latest round of awards from Golden Key Asia-Pacific.

The rating comes largely as a result of the chapter’s commitment to community service over the past year.

In 2013 Golden Key kicked off a stellar year of community service initiatives with the English Learners’ Corner, a free weekly service encouraging migrants to practice spoken English in an informal setting. This initiative, led by then-Community Services Director Jackson Mason-Mackay, won the chapter the Asia-Pacific Best Community Initiative award for 2013.

Also among the initiatives was a speaker panel of current and former MPs and Lesbian, Gay, Bisexual and Transgender activists to discuss the actions still needed to ensure equal rights for LGBT people following the Marriage Amendment Act 2013, and a speaker panel providing advice on CVs and interviews to students.

President Tim Ng, a doctoral candidate in the Faculty of Science and Engineering, couldn’t be happier with the direction the Waikato chapter is taking. “It’s great to be recognised for our efforts,” he says. “The committee has worked really hard over the last year to re-invigorate the Waikato chapter.”