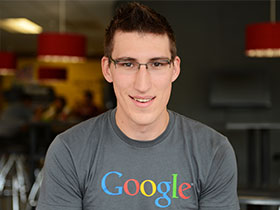 Embracing Googlism: Boris Pfahringer is on an internship with Google in New York City.

Boris Pfahringer is embracing Googlism as he begins an internship with web-giant Google in New York City.

Boris, who has just completed Bachelor of Computing and Mathematical Sciences (Hons) at the University of Waikato, will be working with the Google search team “writing programmes to extend their analysis capabilities”.

“It’s my first time in New York,” he says. “I’m looking forward to working in the Google environment and also having the opportunity to explore the city.”

Google is well-known for its flexible working hours, restaurant-quality food and relaxed way of working. Its New York office is in Chelsea, in the heart of Manhattan.

“I will get good practical experience working with big systems as part of a large group.”

The 14-week internship runs from mid-January until mid-April 2014 and is the second Boris has had with Google. The first was over last summer when he was selected for a place with several others from the University’s Computer Science Department in Google’s Sydney office.

Boris says his internship reselection is partly based on positive feedback that would have been given from his original Sydney internship.

Google internship in New York for Boris is licensed under a Creative Commons Attribution 4.0 International License.