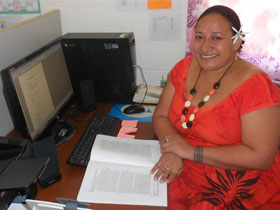 Having her three-year-old son at her graduation will make the long separations Honiara had from him during her study all worthwhile.

The University of Waikato student will be graduating on 16 April at Claudelands Events Centre with a Master of Arts (Applied).

Honiara says leaving her son in Samoa with her parents and family whilst taking up a New Zealand Pacific Scholarship to study at the University of Waikato for two years wasn’t easy.

“When I left in 2012, he was only 10 months old, and being a single mother, it was excruciatingly difficult. During the time I was at Waikato, I would travel back and forth during my breaks just to see him, and the part I dreaded the most was leaving. It was heart-breaking!”

But Honiara says it was worth it.

“It motivated me to do well. I kept saying to myself, ‘you’re doing this for your son….your family and friends back home’, and it all paid off in the end.”

She says the support from her lecturers, work colleagues and Hamilton family was very helpful, especially returning to full-time study after many years.

“My close friends at Orchard Hall were always there to encourage and support me during tough times. Often I would turn up at my lecturers’ doors unannounced if I needed help with assignments and they would always make the time to see me and help me with whatever I was working on.”

Honiara says the highlights of her study were two of the course papers she completed on language teaching.

“I thoroughly enjoyed these courses as they focussed on the overall development of teaching skills and on the preparation and delivery of a series of purposeful and focussed language lessons for second-language speakers of English we had to teach.”

Also attending her graduation will be Honiara’s parents and sisters, her nephew, cousins and an aunty, all from Samoa, and relatives from Auckland, Hamilton and Wellington.

Honiara has now resumed her position as a Lecturer in Communication Studies in the Media & Communications Department at the National University of Samoa. She says studying at Waikato University has enhanced her understanding of theory and practice in language teaching, and enriched her professional life.

“I absolutely enjoyed my two years at Waikato University and would recommend it to any colleagues who were thinking of pursuing further studies. And if given the opportunity to study again, I would go back to Waikato.”