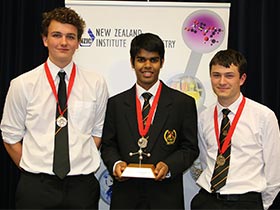 Students from Hamilton Boys’ High School took out the top prize for the second year in a row at the University of Waikato’s ChemQuest challenge held last night on campus.

First place went to Year 12 students Alex Paris, Soumil Singh and Lucas Sherlock from Hamilton Boys’ High School. The students were awarded the James and Wells trophy, $150 and a gold medal each.

This was also the second year in a row that all place-getters were from Hamilton schools. Second place went to Hillcrest High School, third and fourth were awarded to separate teams from St Paul’s Collegiate, followed by another team from Hamilton Boys’ High School in fifth place.

The annual chemistry quiz gives Year 12 students the chance to put their chemistry knowledge to the test in a pop quiz-style challenge.

“It’s great to see students from across the central North Island enjoying ChemQuest, which seems to be more popular now than it has ever been. Being a competition it does bring out the competitive spirit in many students, but there are plenty of different types of questions for students with a wide range of knowledge and interests,” says event organiser Professor Bill Henderson.

“As well as covering chemistry, the quiz is an opportunity for students considering coming to university to see some of the Waikato campus and to experience the atmosphere of a large lecture theatre.”

The after-school event was held at the University of Waikato on 23 October and was attended by about 210 students from schools from Hamilton, the wider Waikato region, the Bay of Plenty and Taupo.

ChemQuest is sponsored by the University of Waikato’s Faculty of Science and Engineering, the New Zealand Institute of Chemistry, James & Wells Intellectual Property and Hill