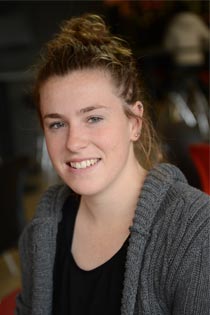 Being able to juggle her sport with study is one of the things that made the choice to study at the University of Waikato an easy one for footballer Sarah McLaughlin.

The former Fraser High School student is in the final semester of a Bachelor of Sport and Leisure Studies at the University of Waikato. Sarah is also the recipient of a Hillary Scholarship and the Prime Minister’s Athlete Scholarship.

“One of the best things about studying here has been the support I’ve received through the Sir Edmund Hillary programme, and being able to work my study around my sport, especially when I’ve been away playing at world cups and or on international tours. I’ve never had to sacrifice my sport for my study as the lecturers are really understanding and helpful, working on pathways for me to study or do exams when I’ve been overseas.”

Sarah plays for Claudelands Rovers and has been a member of the New Zealand Football Ferns since 2009.

Sir Edmund Hillary Scholarships are the University’s most prestigious scholarships and are awarded to high academic achievers who are also achieving in the arts or sport. Scholars have their course fees covered, receive specialist coaching and mentoring and take part in personal development and leadership programmes.

Sarah says she has found the university user-friendly and the lecturers personable and accessible. “I’ve been able to get plenty of practical advice on how to plan my degree, which I had no idea about at the start.

“A highlight has been that the course I’ve done has been really practical, attending a lecture then putting what I’ve learned into practice in tutorials and workshops.”

Student Recruitment Advisers from the University of Waikato will be at the Hamilton Careers Expo at the Claudelands Event Centre on Sunday 8 June from 10am-4pm and Monday 9 June from 9am-3pm.