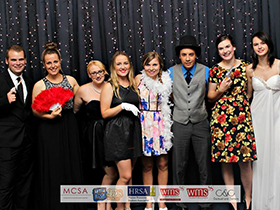 Great Gatsby and Marilyn Munroe look-alikes were among the 150 students and staff who attended the ball. Guests enjoyed live music courtesy of the Waikato Musicians Club, a buffet dinner, special guest speaker and a boogie on the dance floor. Radio hosts from The Edge Waikato attended as MC’s and the DJ kept guests dancing till 12am. An after party held at House Bar on Hood Street kept the night going, with students enjoying drink specials courtesy of House.

Glenn Martin, inventor of the Martin Jetpack one of Time’s Magazine’s Top 50 inventions in 2010, was the guest speaker and shared with the crowd his experiences of “flying the dream”. Despite his glamorous Hollywood stories, Glenn’s charisma shone through his childhood tales of growing up in Christchurch to becoming a successful Kiwi inventor and entrepreneur of the world’s first practical jetpack. He apologised for not bringing a jetpack for a live demonstration.

WMSSA’s Event Manager and Committee Chair, Sam Morgan said this year’s ball was fantastic which showed the hard work that the committee put in. “It was enjoyed by everyone who attended and I hope that it will continue to grow and become a successful event for many years to come.”

Professional photographer, Laura Cardwell, caught all the action on the night and photos are now available on Facebook via the Waikato Management School Students’ Association Facebook page.

Special thanks to the key sponsors for the event: The Waikato Management School, SKYCITY Hamilton, The Edge Waikato, and House Bar.

Having a ball is licensed under a Creative Commons Attribution 4.0 International License.