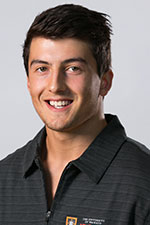 Meeting new people and having flexible study hours to do extra-curricular activities are two of the reasons Zac Millar enjoys studying at the University of Waikato.

“Also just gaining knowledge on subjects that I will be involved with in my future career is really important. I’ve been getting high grades, so that’s been a highlight for me in my study.”

The former Paraparaumu College student is now in the second year of a Bachelor of Management Studies at Waikato University and says he chose to study at Waikato because of the business management papers offered, and receiving a Sir Edmund Hillary scholarship.

Sir Edmund Hillary Scholarships are the University of Waikato’s most prestigious scholarships and are awarded to high academic achievers who are also achieving in the arts or sport. Scholars have their course fees covered, receive specialist coaching and mentoring and take part in personal development and leadership programmes.

Student Recruitment Advisers from the University of Waikato will be at the Wellington Careers Expo at the TSB Bank Arena, Queens Wharf on Friday 16 May from 10am-4pm and Saturday 17 May from 9am-3pm.