A badminton player and a pianist are the latest University of Waikato students to receive Sir Edmund Hillary medals.

The prestigious medals are awarded to the top graduating Waikato University Hillary Scholars who achieve at the highest level academically and in their chosen sport or performing arts and have also demonstrated exceptional leadership while on the programme. 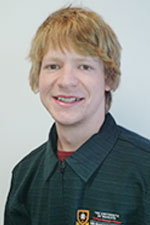 In 2010 Andrew began studying piano under Katherine Austin at the University of Waikato and he has now completed his BMus (Hons). As an undergraduate student, Andrew's successes included reaching the semi-finals of the 2011 Lev Vlassenko Australasian Piano Competition, and winning the 2012 University of Waikato Concerto Competition. The latter led to Andrew embarking on a regional tour with Opus orchestra, playing Prokofiev's third piano concerto.

In 2013, in his Honours year, Andrew won first prize in the 46th National Concerto Competition, where he also won the audience choice award and junior jury prize. Andrew also has a passion for composing. In 2012, he was the winner of the acoustic section and performance award at the University of Waikato Lilburn Trust Composition Awards.

He intends remaining in New Zealand to study towards his masters before continuing his studies overseas.

“Though I do not know exactly where I will go, at the moment Germany seems likely,” he says.

Andrew says the Hillary Programme has provided “great support” to his studies.

“Perhaps one of the biggest things I've found it has helped me with is developing a consciousness about my goals and what I'm trying to achieve, and provided support in helping achieve these goals. The support of the high performance manager has also been fantastic.”

Michael - who is currently based in The Netherlands, working for a Dutch company and playing badminton for the Amersfoort club in the Dutch League – says his job came about from a summer research scholarship during his studies at Waikato.

He’s excited by the opportunity he now has to work almost anywhere in the world thanks to his BE(Hons) degree, specialising in software.

“By the end of school (Hillcrest High School) I was sure that I wanted to do a software-related degree but I also enjoyed sciences, so software engineering stood out. It's a field that fits well with the travel required for badminton. There are plenty of job opportunities worldwide and you tend to be able to take your work with you if travelling for tournaments,” he says.

His time on the Hillary programme has been a “huge factor” in being able to continue with high performance badminton and full time study, he says.

Focus on success at uni and beyond

“The guest speakers and other support we were provided with all helped us to focus on what we really wanted to achieve in our time at uni and beyond. Right from the start it was great to meet lots of like-minded people and this continued throughout the programme.”