Hillary Scholar set to go against the West Indies 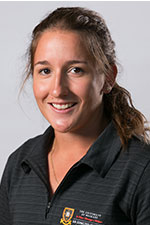 Waikato University student and former Hillary scholar Felicity Leydon-Davis has been named in the White Ferns squad to take on the West Indies in this month’s women’s home cricket series.

Felicity says the upcoming competition is the chance she’s been waiting for.

“I’m really excited leading into this tour and it will be a great opportunity to step up to the next level in the game.

“I’ll be on tour for three weeks then possibly another four for the Bangladesh Twenty20 World Cup, depending on how we go.”

Felicity will be playing alongside other cricketers from Auckland, Wellington, Otago and Canterbury who make up the White Ferns team.

Felicity, who is studying a Bachelor of Science, was first named a member of the New Zealand White Ferns Squad in 2012 where she travelled to Sri Lanka for a training camp tour. This year is the first time she has been selected into the Squad for an official series. Last year, she won a Sport Blue for cricket at the 2013 Wallace Corporation University of Waikato Blues Awards.

As well as an avid cricket player, Felicity is a badminton champion having previously landed top spots in New Zealand, Junior International, and Pan Pacific competitions.

The Sir Edmund Hillary Scholarship programme is the most prestigious scholarship on offer at Waikato University and are awarded to students who are high academic achievers who are also achieving in the arts or sports. Scholars have their course fees covered, receive specialist coaching and mentoring and take part in personal development and leadership programmes.

Hillary Scholar set to go against the West Indies is licensed under a Creative Commons Attribution 4.0 International License.