Hillary scholars embark on a journey of a lifetime 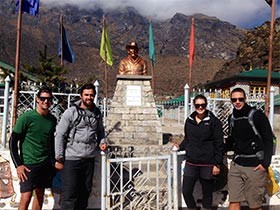 Luke Coxhead, Natalie Good, Sharee Hamilton and Steven Rae headed to Nepal in February to see some of the initiatives Sir Ed started in Nepalese communities, and brave the elements of an enduring trek through the Khumbu Valley.

The flight to Nepal was in total darkness and included a stop-over in Hong Kong. Their first glimpse of daylight wasn’t till they had reached the mountains of Nepal.

“When we reached Lukla Airport we immediately got hit with the cold temperature and everywhere you looked you could see mountains,” says Steven.

“Throughout the whole trip, every corner we turned or every view we encountered was a ‘wow’ moment.”

It was a battle of the elements for the group as they endured high altitudes of 4,800m above sea level, four to six hours of trekking every day, and extremely cold temperatures. Simple day to day acts became complicated.

Despite the extreme temperatures, it was an incredible experience. Steven says it’s difficult to sum the whole trip up, but it was something he’ll never forget.

“It’s just one of those experiences where being in another part of the world gives you an alternate view of other people’s lives.

Hillary scholars embark on a journey of a lifetime is licensed under a Creative Commons Attribution 4.0 International License.