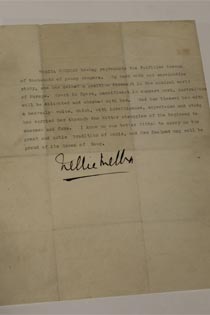 History relocated: The John Mansfield Thomson Archive has found a new home at the University of Waikato.

The collected archives of New Zealand’s “first and greatest music historian” have found a new home at the University of Waikato library.

The archive is stored in a controlled environment in the library but is open to anyone interested in accessing the extensive notes, images and personal papers. A descriptive index of the archive has been made by PhD student Phillippa Ulenberg.

Thomson was a prolific writer and collector and the archive represents about half of his work, with the other half stored in the Turnbull Library in Wellington.

Thomson, who died in 1999, was New Zealand’s foremost music scholar. In an illustrious career he wrote a number of key works that significantly advanced the understanding of music in New Zealand.

As well as biographies of individual musicians, performers and composers, Thomson wrote the Oxford History of New Zealand Music and the Biographical Dictionary of New Zealand Composers, both now regarded as definitive works on their subjects.

Thomson also had an international reputation and worked for many years in Britain where he founded, and for a decade edited, the prestigious journal Early Music for the Oxford University Press. He also worked as an editor for Faber and Faber, developing interests in design, typography and caricature. He was particularly interested in the flute and recorder and wrote books on these instruments. Thomson also wrote librettos for opera and made time to pursue other interests including photography and architectural history.

A major source of information

Dr Lodge says the archive is a major source of information.

“It has lots of potential for research on New Zealand’s cultural history, music history, visual arts, books and publications,” he says.

“The Archive dovetails with the Thomson Collection of Prints and Engravings held on permanent loan jointly by the University and the Waikato Art Museum. Some of the material dates back to the 17th Century.”