Jared Rigg recognised for his work with UN 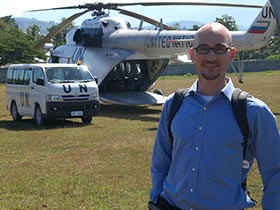 University of Waikato graduate Jared Rigg is the winner of the annual Professor Ted Zorn Waikato Alumni Award in Management Communication. Jared graduated with a Master of Management Studies with distinction in 1998.

Jared has been recognised by the Waikato Department of Management Communication for his extraordinary achievements in leadership positions in the United Nations and the work he has done over a decade for communities in crisis all over the world.

Jared’s current responsibilities include serving as deputy of the Security Sector Reform Unit in the Department of Peacekeeping Operations at United Nations Headquarters in New York. Jared recently completed a 12-month deployment as Senior Security Sector Reform Officer in the United Nation Support Mission in Libya. Previously, he has supported the establishment and performance of United Nations security sector teams in Kosovo, Liberia, Nepal, Somalia and Timor-Leste.

In 2004, Waikato Management School’s Department of Management Communication established a special annual alumni award named after the former Chair of Department Professor Ted Zorn. Jared, who is the 10th recipient of this award, has decided to donate his award funds to the Women’s Refuge New Zealand, in Professor Ted Zorn’s name.

“I have seen war’s devastation first-hand and have, through experiences and as a father, come to appreciate the central role of family in bringing peace to our world,” he says.

“Parents who commit themselves to such a love, in particular women in the face of domestic violence, deserve our admiration and support.”

Jared appreciated the guidance he received form the Department of Management Communication as a student, especially from his thesis supervisor Professor Juliet Roper and then Chair Professor Ted Zorn who, according to Jared, was often “my mentor, my coach and my guide in studies and life. During stormy waters, he was a rock”.

The award event is on 30 April at the Hamilton City Council reception Hall.

Jared Rigg recognised for his work with UN is licensed under a Creative Commons Attribution 4.0 International License.