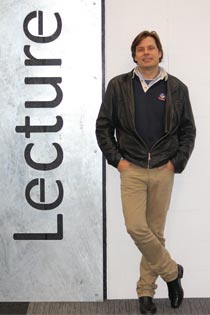 More than 60 people attended an early morning lecture by the man responsible for determining the kiwi is closely related to the extinct elephant bird of Madagascar, rather than being an Australian import, as previously thought.

Professor Alan Cooper is a specialist in the analysis of ancient DNA and is based at the University of Adelaide’s Australian Centre for Ancient DNA (ACAD), where his team extracted DNA from bones of two elephant birds which revealed a close genetic connection with the kiwi, despite the striking differences between the two.

“It’s the last place I would have guessed,” he says.

“The kiwi looks nothing like the elephant bird, it's on the other side of the world. There’s no reason to think there might be a relationship between the two.”

Professor Cooper’s researchers now believe that both the kiwi and giant elephant bird were descended from a small flying bird which probably flew here from a source population in Antarctica at a time the continent was more hospitable.

Professor Cooper’s work has just been published in Science magazine and he was visiting the University of Waikato to catch up with Professor David Lowe and Dr Ray Cursons on a joint Marsden-funded study into possible ancient DNA preserved in buried soils on volcanic ash beds.