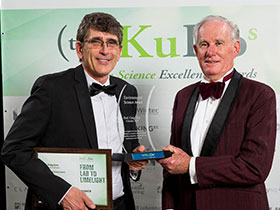 KuDos Award: Professor Craig Cary from the University of Waikato is presented with the Environmental Science Award at the KuDos Awards by Emeritus Professor Warwick Silvester.

An American academic whose main area of research is 5000km away in Antarctica has been recognised for his environmental science work.

Professor Craig Cary from the University of Waikato’s Faculty of Science and Engineering won the Environmental Science Award at the annual KuDos Science Excellence Awards in Hamilton last night.

The awards - now in their eighth year - support and recognise outstanding achievement in scientific research and innovation from the Waikato region.

Professor Cary considers himself a Microbial Ecologist and his interest lies in researching bacteria which live in extreme environments, including deep sea thermal vents and the soils of Antarctica.

He is interested in learning how bacteria in these environments establish themselves, maintain life, and evolve as communities.

He says it is an honour to be receive the award.

“It has been received by many prestigious researchers before me.”

The recognition of awards such as KuDos encourages scientists to “do better science,” he says.

“People get the chance to see what we’re doing and that’s great. It is important people know. You always want to get better and do it better, ask harder questions.”

He says the KuDos awards are an important way to recognise science in the Waikato.

Professor Cary’s work now includes areas such as lake restoration in the region, and didymo research, where his laboratory is charged with monitoring for this pest throughout the North Island. He is based in the Thermophile Research lab (TRU) and a containment lab wing which was built recently allowing the University to bring in samples from Antarctica for research.

University of Waikato Advanced Technical Officer Chris McBride was also a winner at the awards, taking out the Hill Laboratories Laboratory Technician Award, ahead of aquatic technical team leader Dudley Bell, who was also a finalist in the category.

Associate Professor Nicola Starkey was a finalist in the Gallagher Medical Science Award while Emeritus Professor Roy Daniel was presented a Lifetime Achievement Award at the awards.

KuDos for Antarctic researcher is licensed under a Creative Commons Attribution 4.0 International License.