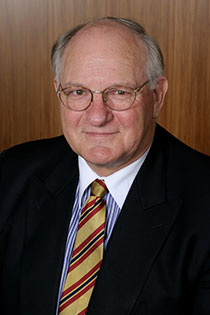 Senior Court of Appeal Judge and President of the New Zealand Law Commission Sir Grant Hammond is having a special degree conferred at the University of Waikato.

Sir Grant will receive his Doctor of Laws degree (LLD) at the university’s graduation ceremony on Wednesday 22 October in recognition of his internationally recognised legal scholarship on the law of remedies and in the area of the role of the judiciary and judicial boundaries.

The judge has had an extensive career that’s combined practice with academia, taking him all over the world.

By the late 1980s, Sir Grant decided it was time to come home and was appointed Professor of Commercial Law at the University of Auckland and subsequently became Dean of Law.

From there it was to the bench where he was a High Court judge for 11 years and presided over many civil and criminal cases. Two Waikato cases that still stick in his mind were the Tainui settlement case – the first Treaty of Waitangi settlement to be signed, and the 1995 New Empire Hotel arson in Frankton – in which six people died. The trial was the first in New Zealand to allow television cameras in the court.

Experienced many aspects of the law

And that’s where he remains today. “I can say that my career has been a steady upward curve, and I’ve been very fortunate to have experienced so many aspects of the law.” He says his current position on the Legislation Advisory Committee is more a back room kind of job, but is actually very significant for the implementation of New Zealand law.

“We’re a committee of a dozen all pretty senior law and civil service people who report to Parliament on all incoming legislation that goes before parliament, and we can also guide ministries on how to prepare legislation. It’s all about improving the quality of legislation, before it gets passed into law.”

Whilst on judicial sabbaticals Justice Hammond has also taught as a visiting professor at Cornell University (New York) and was the Robert S Campbell Fellow at Magdalen College at Oxford in 2008. He continues to travel widely to talk about aspects of New Zealand law. He has also published a large number of books and book chapters on a variety of legal subjects.

Knighted for services to law

Sir Grant was knighted in 2011 for services to law.

He says being awarded the first Doctor of Laws from Waikato means a great deal to him: recognition by his peers of many years endeavours as a scholar and judge and by an innovative law school in the area he grew up in.