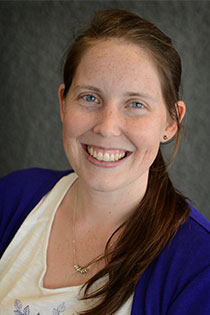 Rotting leaf litter might not excite many people, but University of Waikato PhD candidate Rebecca Gladstone-Gallagher finds it fascinating.

The fellowship arises from a gift of $40,000 made to the University of New Zealand in 1935 by Sir George Shirtcliffe and assists students of outstanding ability and character who are graduates of a New Zealand university in the continuation of their doctoral studies in New Zealand or the Commonwealth.

Rebecca is now 18 months into her PhD. The same week the 26-year-old Hamiltonian was notified she’d been awarded the Shirtcliffe, Rebecca also found out she’d received the Waikato Graduate Women’s Charitable Trust Merit Award for Doctoral Study of $3000 a year for three years, and the New Zealand Coastal Society PhD Scholarship of $5000. She also has a University of Waikato doctoral scholarship of $22,000 a year.

“It was a really crazy week. I was quite shocked but it’s great because the funding opens lots of doors for me. Now I’ll be able fund a three-week trip to the University of Helsinki in Finland to work with scientists who collaborate with my chief supervisor, Associate Professor Conrad Pilditch. It also means I’ll have funding to carry out more sample analysis, which is very expensive.”

After completing a Bachelor of Science in Biology at Waikato, Rebecca took part in a Summer Research programme. She says it was then, working with Associate Professor Conrad Pilditch and NIWA Marine Ecologist Dr Carolyn Lundquist, that she received exposure to this particular field of research, and decided she’d continue with it at a postgraduate level, going on to study a Master of Science in Biology.

“They are such great supervisors and we all work really well together, so that’s why I decided to do my PhD at Waikato as well.”

Leaf litter in marine environments is made up of seaweed, seagrass and mangrove leaves, which floats with the tides and currents and is eventually deposited on beaches. It then decays and releases nutrients that could feed animals and other organisms living in the receiving ecosystem. Rebecca’s PhD will quantify how much leaf litter is transported by the tides to these receiving ecosystems.

Rebecca is also one of 10 finalists in the university Three Minute Thesis (3MT) final on 30 October where PhD candidates have three minutes in which to outline their thesis to a lay audience.