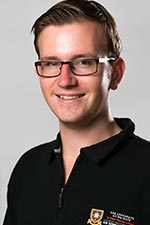 Acting up: Waikato University student Conor Maxwell is one of this year’s new Hillary scholar recipients.

An immortal Spanish corporal, a sergeant who fancies himself as the next William Wallace, and the world’s last surviving left-handed person. Not the usual set of characters that you would find in your average play, but this is no average play and neither is the person who directed it.

Performed by the University of Waikato Drama Society, Disco Panda Station is the first play written and directed by Conor but he has others in the pipeline.

“So far all the plays I’ve written are dark comedies. My second is set during a zombie outbreak and the one I’m writing now is in a women’s prison.”

The Hamilton local, who is studying a Bachelor of Arts and Bachelor of Teaching, is one of this year’s new batch of Hillary scholar recipients. As a scholar, Conor will have his course fees covered, receive specialist coaching and mentoring, and will take part in personal development and leadership programmes.

Success in theatre pays off

It was his success in theatre that landed him the prestigious scholarship. He’s been involved in theatre for six years now, and in his high school years at St John’s College his involvement included national competitions.

“I competed in a number of competitions including the Sheilah Winn Shakespeare Competition and the Waikato High School Theatresports Competitions.

“Since being at university, my achievements have been more personal, such as successfully auditioning for the role of Romeo in Romeo and Juliet last year which gave me the opportunity to play William Shakespeare’s most famous character.”

Conor says every play he’s involved in provides a new set of challenges and more opportunities to do something different.

His future goal is to take his knowledge and skill to the next generation by becoming a teacher of English and Drama.

“Teaching will be my livelihood and acting will be a passion and a very important hobby, if not a job, later on in life.”