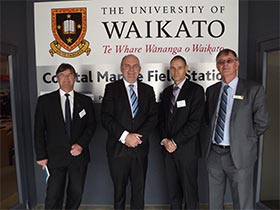 The report, produced by the Ministry of Business, Innovation and Employment, brings together economic data on New Zealand’s 16 regions. It also identifies specific initiatives under way in each region through the Government’s Business Growth Agenda.

As part of yesterday’s proceedings, an interactive website was also launched containing information on 66 sub-regional areas, which was developed to complement the report. The information can be accessed on the go, through a download for tablets.

More than 50 local industry representatives attended the launch at the Marine Station. Minister Joyce, who is also Minister for Science and Innovation and Tertiary Education, took a guided tour of the Marine Station and the House of Science, while talking with guests, staff and University postgraduate students.