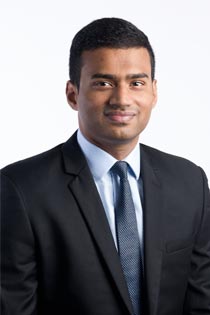 A University of Waikato law graduate, Ashiq Hamid, heads to the United States at the end of the month to study for his Masters of Law (LLM) at New York’s Columbia University.

Mr Hamid has been awarded a prestigious Fulbright Science and Innovation Graduate Award worth US $25,000, one of 11 Fulbright scholarships to be awarded to former Waikato University students and current staff during the last year.

Student selections are based on academic excellence, leadership potential and the ability of candidates to act as a cultural ambassador for New Zealand.

Mr Hamid currently works for the New Zealand Takeovers Panel in the area of mergers and acquisitions, and says winning the scholarship and being selected on Columbia’s law programme is a dream come true.

“Columbia is an ivy league university and one of the best and most selective universities in the world. Columbia Law School is a giant in corporate law and New York is the heartbeat of the world economy, so this is a really fantastic opportunity,” he says.

“I don’t know where my masters degree will take me, but New York is the best place in the world to get experience in the field of law I’m interested in.” That’s primarily financial and economic regulation.

“I plan to study reforms like the Dodd Franks Act 2008 and other legislation the US government took after the global financial crisis of 2008 and how financial institutions and banks have responded to those regulations as well as the impact they’ve had,” he says.

His study year is nine months but Mr Hamid plans to remain in the Big Apple to sit his New York bar exam.

Ashiq Hamid, who hails from Auckland, graduated from Waikato with an LLB (Hons) in 2011. “Public and competition law were my favourite subjects at Waikato. I won subject prizes in both and have gone on to work in those areas. Waikato set me up well to pursue further study, supported and encouraged me to apply for a Fulbright Scholarship. I wouldn’t be here without the lecturers at the Faculty of Law.”

Fulbright New Zealand Graduate Awards consist of a cash payment towards the costs of study in the US (generally for one year), plus a return airfare and basic health insurance cover while in the US. Fulbright New Zealand is jointly funded by the US and New Zealand governments with additional funding from award sponsors, private philanthropists and alumni donors. Its annual operating budget is approximately NZ$2.5 million.

“This is a prestigious scholarship to win,” says Mr Hamid. “I feel fortunate to have made it to the end of the selection process, and having the Fulbright and a masters from Columbia should be a real asset when I’m looking to take the next step in my law career.”