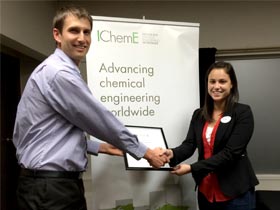 Lindi recently received a Freemasons University Scholarship, alongside three other Waikato students. The $6000 scholarship rewards Lindi for both academic excellence and community involvement and was presented at a ceremony held in Wellington’s Parliament Buildings last month.

Alongside this prestigious scholarship, Lindi was also recently awarded an Energy Education Trust Scholarship worth $5000, based on academic merit and a keen interest in the energy sector.

In addition she has received a $1000 New Zealand Federation of Graduate Women (NZFGW) Waikato Graduate Women Engineering Prize, for the most outstanding female student in her third year of study towards an engineering degree.

Finally she also received the Institute of Chemical Engineer’s (IChemE) Society of Chemical Engineers New Zealand (SCENZ) Award of Excellence for the top 2013 student at Waikato University studying chemical and process engineering. The award consists of a $350 cash prize and a paid membership to IChemE, sponsored by PDV Consultants. The award ceremony was held last month in Rotorua.

“I am both honoured and proud to have received these awards and scholarships as it recognises all the hard work that I have put in throughout my engineering degree. I am also very grateful for the financial support as it allows me to focus on my studies without the stress of how I am going to pay for it,” says Lindi.

Previously a student at Sacred Heart Girls’ College in Hamilton, Lindi is currently in her fourth and final year of a Bachelor of Engineering (Honours), studying the Chemical and Biological Engineering programme, with supporting papers in process engineering.

“The small class sizes in comparison to other universities mean you aren’t just ‘another number’; lecturers actually know your name.”

When she graduates, Lindi would like to gain experience in New Zealand’s oil and gas industry.

“My advice to potential students is to apply for all the scholarships on offer; there are so many and they help a lot. Waikato is an excellent choice, with great facilities and resources, which give you an internationally recognised degree.”