Music is science: The first DMA at Waikato 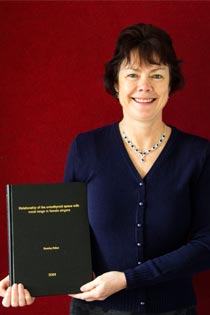 Music and science: Beverley Pullon is the first to hand in her thesis for a DMA at Waikato.

Beverley Pullon has found a way to bring her love for music and background in science together.

The Hillary scholar and New Zealand Opera singer will be the first to graduate from Waikato University with a Doctor of Musical Arts (DMA), and is only the second graduate in New Zealand to gain this qualification.

The DMA degree includes both critically appraised musical performances and undertaking research to write a thesis.

Beverley just handed in her 50,000 word thesis that looks at the relationship of the cricothyroid space to vocal range in female.

The idea originally came from attending a singing seminar she said. “The professor told me I had a really small cricothyroid space and when I asked him what the significance of that was, he couldn’t really answer me.

My real job is working part-time as a haematology scientist at Waikato Hospital, testing blood samples, so it made sense to do a scientific study as I can easily understand and interpret scientific measurements.”

In carrying out her thesis research, Beverley used a sample of 43 female singers and performed ultrasound scans on them to determine whether the distance of the cricothyroid space had any influence on their vocal range.

What she found is that singers with a smaller cricothyroid space can sing higher notes.

“Mezzo-sopranos have a wider space than soprano’s which correlates with them being able to sing lower notes.”

Beverley received a doctoral scholarship in 2010 to complete her DMA at Waikato and managed to do this while participating in a number of operas with lead roles, working part-time and battling an illness which saw her have to take a break for seven months.

Her chief supervisor at Waikato was Associate Professor Martin Lodge, while her other supervisors were Dame Malvina Major (also Waikato) and anatomy expert Professor Mark Stringer from Otago University.

With her thesis out of the way, Beverley has freed up a bit of time and looks towards some new goals, including getting more involved with the Dame Malvina Foundation, potentially some more teaching and performing more with NBR NZ Opera.

"I’d like to start a small touring group of opera performers and take them to small town centres and retirement villages to perform for people that wouldn’t normally have access to attend operatic performances," she says.

Music is science: The first DMA at Waikato is licensed under a Creative Commons Attribution 4.0 International License.