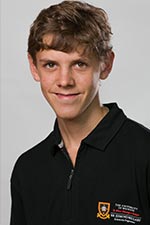 Young scholar: Fourteen-year-old Matthias Balzat is one of this year’s new Hillary scholars.

Waikato University student and new Hillary scholar is one of a kind. Not only is he recognised as a top New Zealand cellist for his age, he is also one of the youngest students to enrol at Waikato University.

The 14 year old former Wentworth College student started playing the cello when he was three years old, and has been awarded a Sir Edmund Hillary Scholarship to study music at Waikato University.

He is one of the youngest Hillary scholars to be accepted into the scholarship programme after cellist and former student Santiago Canon-Valencia, who also became a Hillary scholar at the age of 14.

Matthias is no stranger to success, having recently competed in the National Concerto Competition where he won shared first prize as well as the People’s Prize (audience vote). He is the fourth consecutive music student from Waikato University to have won the competition. Other Hillary scholars, and Waikato University music students, who’ve competed in the competition are pianist Andrew Leathwick and cellists Santiago Cañón Valencia and Edward King, all of whom won first prize.

Music in the family

Matthias comes from a strong musical family with both parents, Viv and Uwe, and six siblings all being avid musicians. Their family band is called The Balzats and they have performed at a number of concerts and festivals around the country including a performance on TVNZ’s Good Morning show.

His sister Brigitte Balzat, who is a current student at Waikato University, has also been awarded a Hillary scholarship this year. Her discipline is the violin and she is now in her second year of a Bachelor of Music.

Matthias says being a part of the Sir Edmund Hillary Scholarship programme is an opportunity that will not only foster his musical talents, but will help him grow as a leader and community advocate.

“I’m very grateful for being given this opportunity and I’m really looking forward to the year ahead.”