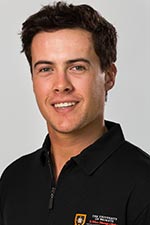 Playing one sport well is hard enough, but for new Hillary scholar Vincent Harris playing two sports at elite level is a piece of cake.

The badminton and softball player is one of this year’s Sir Edmund Hillary Scholarship recipients, and has recently been named in the New Zealand Junior Black Sox team where he will compete in the Junior World Championships this year.

As a Hillary scholar, Vincent will have his course fees covered, receive specialist coaching and mentoring, and will take part in personal development and leadership programmes.

The former Hamilton Boys’ High School student has been playing badminton and softball for a while now, and shows no signs of slowing down.

“I started playing both softball and badminton in year five at school, so that makes eight years now in both disciplines.

“Being named in the Junior Black Sox team has been the biggest achievement in my life so far.”

Vincent is studying a Bachelor of Laws at the University of Waikato. With his sights set on a possible future with law, Vincent still wants to see how far his sporting career will take him.

“With both softball and badminton it is my plan to continue training with my club, regional squads and the national softball squad.”

New Hillary scholar is twice the talent is licensed under a Creative Commons Attribution 4.0 International License.