New history professor has a fever for the archive 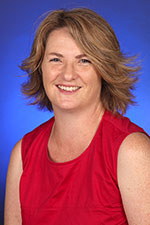 Professor Coleborne bucked the trend and came from Australia to the University of Waikato in 1999 after she completed her doctorate at Melbourne’s La Trobe University. “It’s a young university, like Waikato. It had a similar culture. New universities are often more experimental and have a more radical edge to their subjects,” she says, so it didn’t take her long to feel at home in Hamilton.

While she teaches a range of history papers her specialist research area is social history – history of families and private life. “I love looking behind ordinary people and finding they have extraordinary stories, and making their lives visible.”

Much of her research has been around areas of mental health, including medical diagnoses, families, and institutional treatment and care, particularly in colonial Australia and New Zealand. She has also written a book about Tokanui Hospital and mental health in the Waikato 1910-2012 and is on the editorial board for the international journal History of Psychiatry.

Professor Coleborne says it was while she was a fourth year honours student she developed “a fever for the archive”.

“Then between my masters and doctoral degrees I had some private research contracts. One involved investigating the history of nurses and matrons in Victoria and I found records literally rotting in hospital basements; that would fall apart in your hands.” She was hooked.

She says while some people fear the loss of books and the influence of digitisation, she says for historical records, the internet provides a wonderful opportunity and makes previously inaccessible records accessible to a wider public. To that end Professor Coleborne has pioneered the teaching of undergraduate digital history in New Zealand and this semester is teaching a paper on digital histories.

She is keen to see the wider community more involved in events that celebrate our history. “I see part of my role as raising awareness, getting people more interested in the place of history in our local and national communities,” she says.

Professor Coleborne was one of six new professors named this week at the University of Waikato. The others are Brian Gabbitas and Kim Pickering from Engineering, Kathryn Pavlovich from Management, John Williams from the Faculty of Education and biological scientist Brendan Hicks.

New history professor has a fever for the archive is licensed under a Creative Commons Attribution 4.0 International License.